It has taken me some time to complete this review of the Voyage menu being served at contemporary European restaurant Whisk. Partly because of other deadlines and partly because it was a challenging meal that takes the diner on a journey through Scotland, Germany, Italy, Spain, Norway, England and France. Challenging in the sense that the dishes were complex, with numerous ingredients on a plate and multiple techniques, as favoured by chef de cuisine, Bjoern Alexander Panek. I wasn’t, and am still not, convinced, that every dish was a success. I searched for some answers by interviewing the chef after the dinner and I include his comments within the review in italics, as well as some concluding remarks at the end.

All images supplied by Whisk, click on image for larger view.

Getting things off to a great start was the amuse bouche, an espresso cup of lobster and curry soup that definitely enlivened the palate.

Scotland, Scottish Oyster, Foie Gras & Grapefruit, was a disappointment and for me did not work. The metallic notes of the oyster did accentuate the liver taste of the foie, which was spread on the bottom of the oyster shell, but to such a degree that I found it unpleasant. Iron and zinc do not make culinary gold. I also thought that the acidity from the grapefruit granita was too sharp for the foie.

It was off to Germany for the next course, German Forest, Beef Tartare, Dark Bread, Roots & Potato, which was matched with Domaine du Chateau Gris ‘Clos de Lupe’ 2009 Pinot Noir, Burgundy, France, a sublime pairing. A visually impressive dish with multiple techniques involved in the creation of the colours and textures of a forest. It was also the first sign that chef Bjoern likes to combine many, many elements and techniques on one plate, sometimes more successfully than others in my opinion as I thought was the case here. Were all the elements necessary? Did they really bring anything to the taste of the dish? Perhaps one reason that this was not a favoured dish for me is I am not enamoured by beef tartare at the best of times. My dining companion appreciated all the effort that had gone into the dish, as did I, and he found it a pleasant dish to eat. 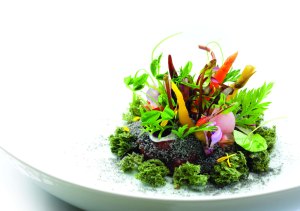 When looking back at my notes I made on the night, I noted of Italy, Calamari with Red Capsicum, Garlic & Chilli, that it was a riot of texture, taste and colour. Textures: crunch from toasted rice, calamari (two textures), creamy — sauce, paste; Taste: smoky, sweet, raw and cooked calamari — that in both cases had excellent bite without being chewy, spice heat, and salty from the sea grass. With no advice on how to eat the dish and with so much going on we were left to our own devices in terms of what to gather on the fork, resulting in some spectacular mouthfuls at times and disappointing ones at others, with peaks and troughs of flavours. Like tripping on mushrooms every moment was a different experience with some more enjoyable than others. The wine pairing of Domaine du Clos des Fees, Vieilles Vignes, Grenache Blanc, 2009, Roussillon, France, worked well, especially given the variety of flavours in the one dish.

“Italy is messy, yes, but I want this… it has squid ink, rice — crunchy with black miso paste, black garlic paste, smoked capsicum cream, red, yellow and green tomatoes, Italian chilli powder, citrus leaves for acidity, squid carpaccio, deep-fried sous vide calamari in tempura batter, a sago-like product and sea grass from Italy. It is a very complex dish but I believe it captures the tastes of Italy.”

Spain, Carabinero Prawn with Emulsion of Milk, Quinoa & Olive Oil , was one of my favourite dishes. The Rolls Royce of prawns, the flavour-packed Carabinero was complemented by the milk emulsion, which served a similar role to mayonnaise, with crunch from the quinoa and body from the pearls of olive oil, with a hint of chilli. Everything on the plate worked, it was all necessary. An intriguing dish as there was still a lot going on, as with past dishes, and as equally complex, but yet it came together with sublime grace; the prawn clearly the hero of the dish. Unlike previous dishes which were like a number of soloists all competing for attention, here the prawn was the lead singer and the other ingredients a solid backing band. A fantastic performance that deserves a standing ovation. Not surprisingly the wine pairing of Georg Mosbacher Forster Riesling Kabinett 2011, Pfalz, Germany, was a perfect match. 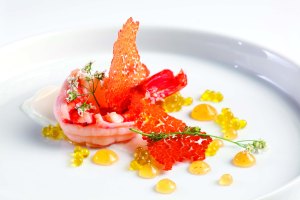 To Norway next, Mussels, Dill & Smoked Salmon. A confusing dish, resembling a soup, but it would have been a strange time to serve a soup course. During my post-dinner interview with the chef he explained that perhaps too much “sauce” had been added to the dish by the server so that it took on an appearance of soup. It consisted of dried and grated crispy smoked salmon that visually looked like a butterfly, with mussels and dill oil in a cream and milk seafood broth. It was a nice dish but suffered somewhat due to the preceding dish being so spectacular. The wine pairing was a surprise, in that one does not expect to have a glass of Champagne, in this case, Louis Roederer Brut Premier NV, Champagne, France, at this stage in a degustation meal, but it worked well with the dish so why not.

Norway. If only it had been presented like this instead of in a shallow bowl.

“This dish is based on a traditional Norwegian dish of mussels, dill and onion, with the full flavour of the sea.”

The final savoury course was England, Lamb Rack & Tongue with Baked Beans Sprouts, Bacon & Worcestershire Sauce. The perfectly cooked lamb had an intensely lamb-y taste from being cooked sous vide, given further depth by the smokiness of the baked bean ‘mousse’ and savouriness via a miso cracker. More hyper complexity with this dish and again the question of everything on the plate being necessary arose for us. It was impossible to get all the flavours in one mouthful so again I felt lost in how to approach the dish as some combinations of flavours definitely better than others. The chef’s refined version of mint sauce, that softened the intensity of the lamb, was a taste note that was also picked up in the delicious wine, Alpha Domus ‘The Navigator’ Merlot/Cabernet/Malbec, 2008, Hawkes Bay, New Zealand. 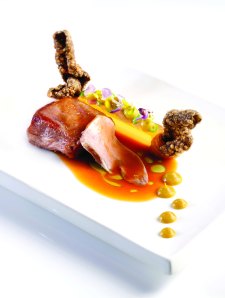 For dessert it was France, Apple Tart, Caramel & Vanilla. For me, one of the best dishes of the night, and while complex was not challenging. Again there was a lot of technique that had gone into the visually stunning dish, such as making an amazing tasting ‘caramel’ from white chocolate, plus meringue, green apple jelly and sorbet, further amplified with the deconstructed presentation. Yet nothing was superfluous and every mouthful was one of the most delicious apple tarts ever, seamlessly reconstructed on the fork. Brilliant on every level my dining companion proclaiming it as one of the best desserts he has ever eaten. It was served with a glass of Chateau Cantegril 2004 Sauterne, from France.

“My idea for the menu is to take some ingredients or classic dishes that are associated with each cuisine and then make it my way. Yes, many dishes are challenging with a lot going on, but I am taking my cuisine in a direction that speaks of me. Communication is key between the diner and staff and I do think that it is important to explain the dish to the diner and how to eat it (when necessary), and the way it has been prepared and the tradition behind it. Every plate I do has my signature, a concept, art on a plate, organised chaos… it says me.”

Perhaps our experience would have been different if we had received more instruction and explanation, there really wasn’t much except from the chef when he had time. He is certainly always talking to diners, both in person and through his food, although I felt that with some dishes he was talking with us, and with others at us.

Ultimately it was challenging, and there is nothing wrong with that. I applaud the chef for having an individual approach to food, and for his creative and technical abilities. Sometimes as a diner you don’t want to be stretched so when I am in that kind of mood I would eat somewhere else, but when I was in the mood to be surprised, challenged and to try dishes that I am unlikely to see anywhere else in Hong Kong I would happily eat at Whisk.

2 responses to “Whisk, a review”